New solar technology has been developed in the form of hybrid inverters. These inverters can combine the benefits of regular solar inverters with the flexibility of battery inverters into one piece of equipment. A hybrid inverter is a new option for homeowners who want to install a solar power system that can be expanded in the future to include other parts, such as a battery storage system.

Here, we look at what a hybrid inverter is and the different types and functions it has.

What is a hybrid inverter? How does it work?

What are the different functions of a hybrid solar inverter?

An inverter's primary function is to change the direct current (DC) that is fed into it from your solar panels into alternating current (AC), which your house is able to make use of. This method is taken to a whole new level when a hybrid solar inverter is used, which brings with it a number of benefits, including the following:

When it is a hybrid model, one piece of equipment can do the job of both the inverter and the battery. The hybrid grid-tie inverter can use AC electricity to power your home. It can also take AC electricity from the grid and turn it into DC electricity that can be stored in batteries for later use.

Regulation of the Power Supply Solar panels can produce different amounts of power depending on the time of day and the weather. This is because the amount of sunlight changes throughout the day. A hybrid inverter controls and regulates this electricity to make sure that the system as a whole works within the parameters that were set.

Power Monitoring Solar hybrid grid-tied inverters can be fitted with solar power monitoring software to measure and keep an eye on your photovoltaic system. This can be done through the display screen of the inverter or through an app on a connected smartphone. This can assist in locating any faults in the system.

Hybrid inverters with Maximum Power Point Trackers (MPPT) measure how much electricity your solar panels make and compare it to the battery's voltage. This is done to get the most power out of the system. This makes it possible for the most power to be made and for DC electricity to be turned into the voltage that gives the battery the most charge. Your MPPT makes sure that your solar power system will work well no matter what, such as how bright the sun is, how hot the solar panels are, or how much electricity is being used.

Before making a decision about whether or not to add a hybrid inverter to your electrical system, you should know about the three main kinds.

The type of hybrid inverter that is used most often in off-grid power applications is an inverter/charger hybrid. This piece of equipment has all the features of a regular battery charger and inverter, as well as the benefits of hybrid inverters that we've already talked about.

With this kind of inverter, the electrical system can get power from the shore connection until the setpoint limit is reached. At this time, it will begin adding power from the battery to the mix in in order to prevent the shore supply from becoming overloaded. As soon as the extra load goes down, it will start charging the batteries again using the power it has in whatever way is best.

One type of hybrid inverter that is not very common is one that has MPPT solar chargers built in. These models have all the benefits of a regular hybrid unit, plus they have solar power built in. This makes them a great choice for anyone who wants to save space. The disadvantage of using them is that if one component fails for any reason, the whole system can become inoperable as a result.

As was just said, these machines can do every normal thing a hybrid inverter can do. On the other hand, these are able to send power back into the grid, which is practically the same as selling power back to the power provider. Because of this, some of the costs that are normally incurred when pulling power from your home or another source can be avoided.

Grid-tie systems are subject to stringent regulations, and in order to put one into operation, you will need permission from the nearby utility.

​​Can a hybrid inverter help me go off-grid?

If you want to live partially or completely off the grid, you should seriously think about buying a hybrid inverter. This is because they are able to combine the electricity from a number of different sources into a single stream that can be utilized.

Imagine the possibility of creating an electrical system that is both more powerful and more capable by combining the power of a generator or a solar power system with the charge of your batteries. Because of this, living off the grid is much more bearable over the long run, since you are able to enjoy many more of the conveniences that are standard in a conventional house.

At FSP, we believe that it is important for customers to do their research into significant purchases like this. We spend time looking into the best products on the market and only recommend ones we would use ourselves. Our recommendation for the best hybrid inverter is the HySpirit Three Phase 10kW.  It has the following features: 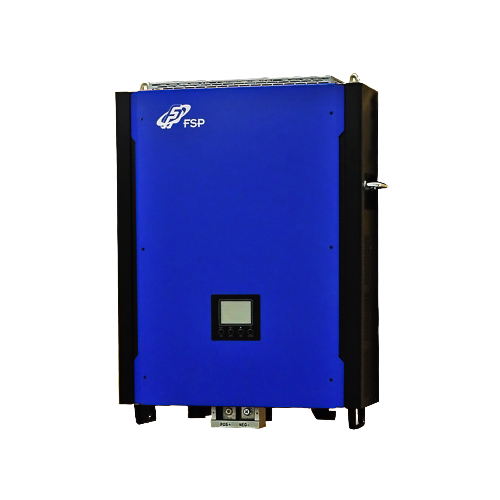 An initial investment in a hybrid inverter may be more expensive, but it may be worthwhile in the long run because it will provide you with a solar inverter that makes the most of the operations of your PV system. With the help of a hybrid inverter, you can reduce how much you need to use the grid, lower your carbon footprint, use more advanced monitoring tools, and make more power.

For more information on hybrid inverters, get in touch with us today and speak to a member of our team.