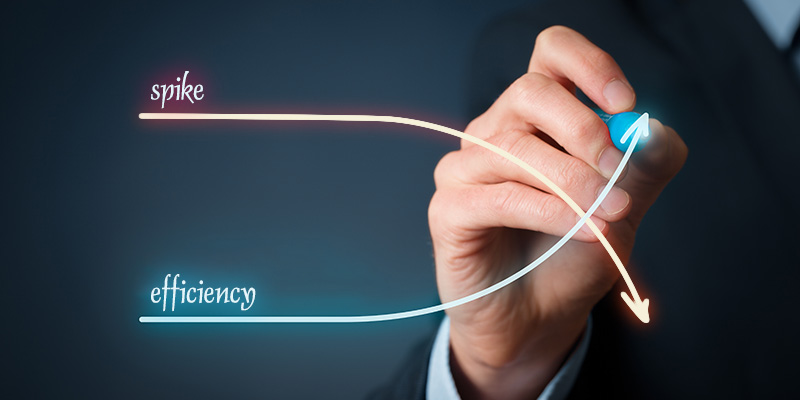 FSP has developed and patented technology which not only significantly increases the energy efficiency of the snubber circuits which are deployed in billions of power adapters and power supplies used in consumer electronics, server and industrial products worldwide, but can also reduce the cost and enhance the electromagnetic compatibility (EMC) of these products. The new FSP snubber technology offers substantial cost and performance benefits compared to competing designs, including traditional RC and RCD snubbers.

Background: What is a snubber? Why is it important?

The abrupt change in current flow through a current switching circuit as it is switched off or on can induce a sudden, brief, increase in local voltage, which may be far outside the normal operating voltages intended by the circuit design. These unwanted voltage spikes are generated by induction, a natural phenomenon first identified by Michael Faraday in 1831. Voltage spikes, or transients, can render electronic devices inoperable by damaging or destroying components, and they can generate electromagnetic interference (EMI) in nearby components and circuits – even those that are electrically isolated.

Power supplies are particularly vulnerable to voltage transients because they contain high power and low power circuits in very close proximity, as an intrinsic part of their design. In some circumstances, high-energy transients and EMI generated by a high power primary circuit may even impact delicate low power secondary components nearby, despite not having a significant adverse effect on the high power side of the device. Moreover, the magnitude of voltage transients can be highly dependent on minor variations in unpredictable input conditions, such as switching speed, and therefore their effects are difficult to forecast precisely and difficult to design for without costly over-engineering.

Over the many years since inductive effects were first discovered, numerous methods have been tried to suppress voltage transients or to mitigate their undesirable effects. The most practical and cost-effective of these methods are the class of subcircuits or devices usually known as snubbers. Typically, a snubber protects an electronic device by dissipating energy and/or by giving current a temporary alternate route around a switch, to prevent or smooth out sudden changes in voltage.

How are snubbers used?

Snubbers are found inside almost all power supplies – both internal power supplies and external power adapters. They are also used in other applications involving switching. As billions of consumer electronics products are manufactured annually, and most of them require a power supply, the market for snubbers is very large.

With billions of snubbers being used in consumer electronics products, even a tiny reduction in power consumption costs or manufacturing costs can result in enormous savings globally. In addition, governments are imposing tighter and tighter rules mandating the efficiency of consumer electronics products, and products which cannot pass stringent efficiency tests may even be barred from sale.

What are the limitations of traditional snubber designs?

Unfortunately, there are several significant problems associated with traditional snubbers. The first problem is the cost of the snubber itself, as several components are generally required. The second problem is that energy is lost in the snubber circuit because the traditional approach is to restrict voltage spikes during switching of the MOSFET, which impacts the overall efficiency of the whole device. Many strategies exist to reduce the cost of the snubber and the energy loss within it, but these may make the snubber less effective at its primary function of combating voltage transients and reducing their harmful effects.

During recent years engineers and researchers at FSP have developed and patented several innovations that form the basis of novel snubber designs which reduce power supply component count or cost, while still saving energy and protecting delicate components from voltage spikes and radio frequency interference. The new FSP snubber designs offer energy savings of up to 3 percent at the low load stage, compared to traditional snubber types.

The FSP snubber also reduces component cost by allowing circuit designers to use a less costly, lower spec MOSFET, as the snubber can be relied on to absorb rapid rises in voltage, instead of passing damaging voltages on to the MOSFET.

In addition, with the FSP snubber helping to absorb voltage peaks and smooth the flow, circuit designers can obviously save time that would normally be wasted working on laying out extra PCB circuit lines for that function.

The innovative FSP Qd diode snubber improves overall efficiency in common circuits that normally suffer from voltage spike problems (e.g. rectifier or synchronous rectifier applications). It achieves this by substantially reducing voltage spikes while at the same time recycling some of the energy that is usually thrown away when damping them.

In real-world test environments, the Qd diode snubber design is superior to traditional RC snubbers, both in terms of energy efficiency and in the efficacy of its voltage spike amelioration. Compared to RC snubbers, the Qd diode snubber provides an efficiency gain of about 2 percent under light loads (in other words, under loads of 10 percent or below), and an efficiency gain of 0.5 percent at average load, while still avoiding voltage spike issues.

Obviously, the long storage time and soft recovery time converges the spike voltage smoothly, so that no bleeder resistor is required, in contrast to other designs. In summary, the Qd diode design kills spike voltages and provides excellent soft recovery.

General implementation guidelines for the Qd diode type snubber include the following: This Qd diode design is generally limited to maximum operating frequencies below about 100 kHz, and the Vd (max plateau) should not exceed 90 V. Ideally, time of duty (Td) should be greater than 0.5 μs. However, in cases where time of duty (Td) is less than 0.5 μs, then duration should be below 50 mS during turn on or short circuit conditions. In other words, this means that the over current protection (OCP) mode can be either shut-down or auto recovery mode, but OCP should not be in current limited mode.

The FSP QJ diode snubber design offers substantial improvements over the traditional RCD-type snubber commonly found in switching applications. Compared to typical RCD snubbers, the QJ diode design improves about 1.5 percent of average, and 4 mW lower than ZCD at 0.25 W load. The QJ diode is designed to recycle the losses seen in RCD snubbers. In adapter and stand-by applications, energy efficiency is increased by 3 percent under light loads (while the load is below 10 percent), and at average loads, energy efficiency is increased by 0.5 percent.

The QJ diode design’s main characteristics are long storage time and smooth off time. In RCD snubber applications, the long storage time of the QJ diode design provides a sufficient length of time to recycle the leakage inductance energy. Meanwhile, the QJ diode’s smooth off time damps the current in a timely manner, which helps to avoid transition overlap between the voltage and the current. The design exhibits a smoother recovery time waveform than traditional designs.

The long storage time obviously also has the advantage of replicating the main functions of most bleeder resistors used in snubbers. With this in mind the resistor value can be adjusted downwards significantly. Therefore the energy losses in bleeder resistors can be greatly reduced, compared to other designs.

General implementation guidelines for the QJ diode design include the following: The minimum off time (Toff) should be greater than 2 μs (developers should refer to the controller specifications,

Toff = T×(1-Ton (max))). Developers should ensure that no reverse current can occur during switch on, to avoid, in the worst case, brown outs, high temperatures, or excess load. If reverse current is observed during development, then resistor and capacitor values can be easily adjusted to avoid this.

FSP designs and manufactures power supplies and adapters for a wide range of products. These include personal computers, general purpose adapters (e.g. for mobile phones and tablets), industrial PCs, servers, LED lighting (SSL), printers, set-top boxes, UPS, medical devices and TVs. The new snubber designs explored in this white paper are most commonly used in the FSP adapter range. The FSP snubber design is also available for licensing to other companies for use in manufacturing.

FSP’s innovations are protected by the following patents, among others.